A few months ago, we previewed the new line-up from JUUK namely Ligero which had been successfully funded on Kickstarter at the end of 2016. The Ligero Aluminium band is a spin-off design from its popular Stainless Steel Link Bracelet with a lightweight material of usage and more vibrant color options. 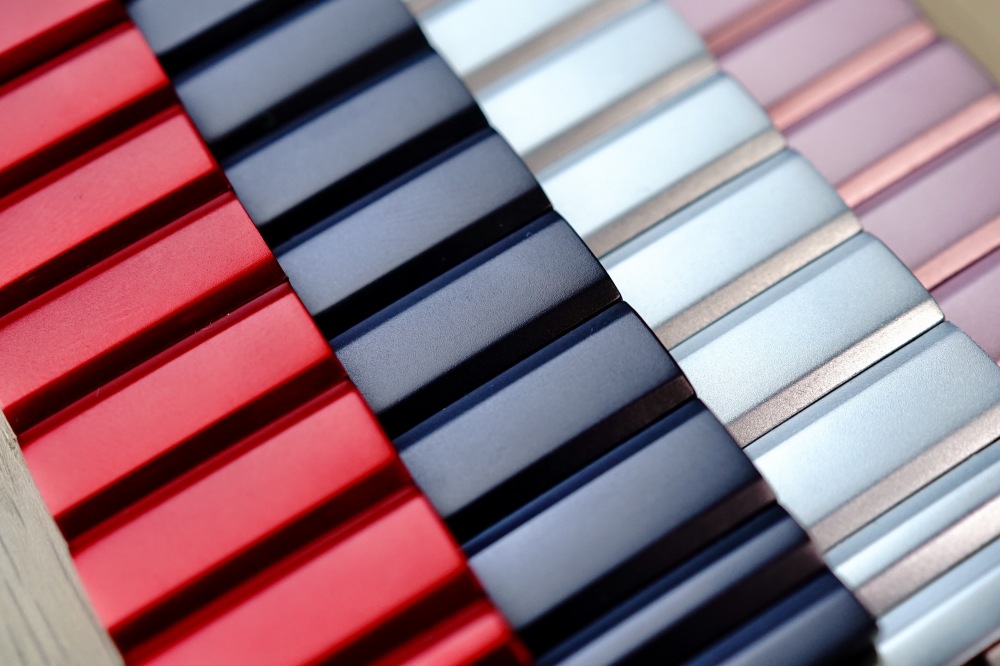 I have just received the final product from JUUK for this review, including Rainbow, Ruby and Silver for my 38mm Apple Watches. There has been a number of improvements overtime on the final design after our preview, including parts, craftmanship, finishing and more colors added. More importantly, the new Rainbow design is specially made for a specific cause. 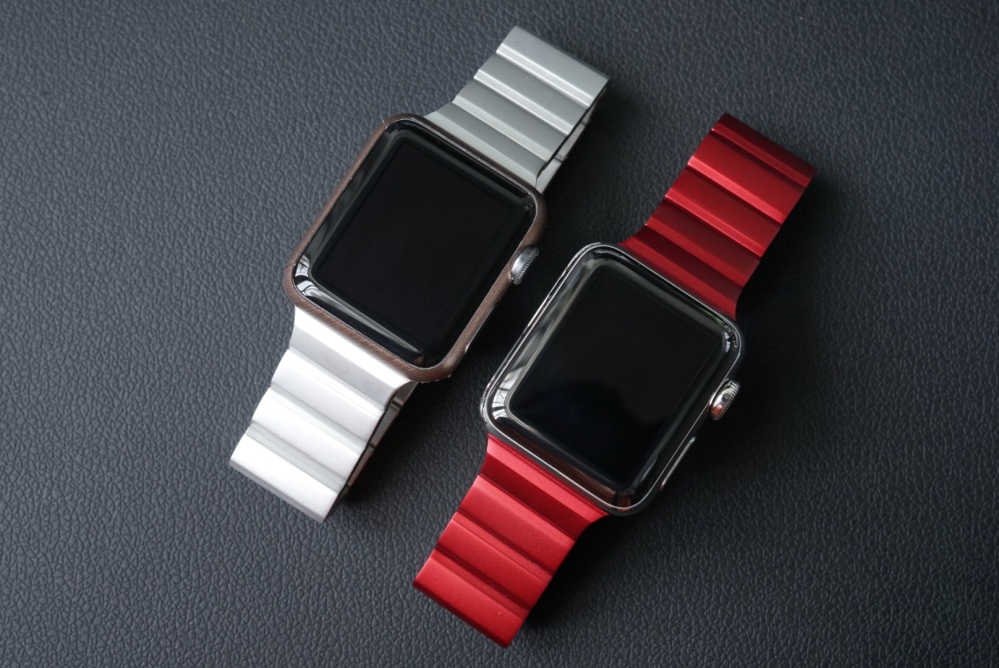 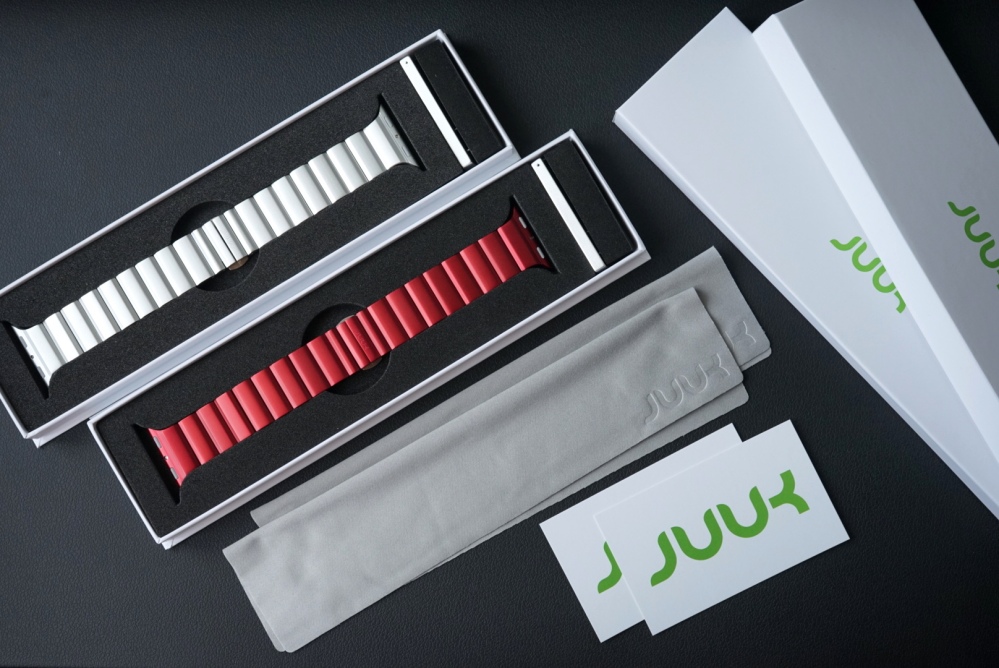 What you should expect inside the box: 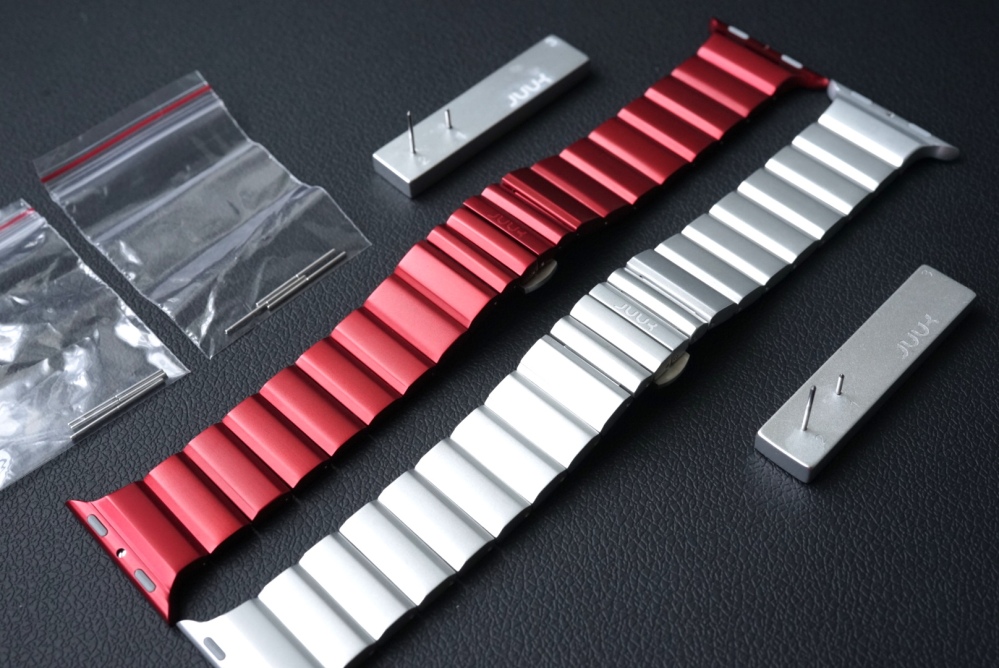 In addition to the colors we previewed earlier, JUUK has added a few nice colors to the 42mm models, including Cobalt (blue), Obsidian (polished black), Cadmium (burnt orange), Tyrian (plum), and Viridian (green).

Currently there are fewer options for the smaller Apple Watch variant. And the Rose gold (formerly Pink) models are coming soon and are expected to start shipping by late June.

Rainbow for a specific cause 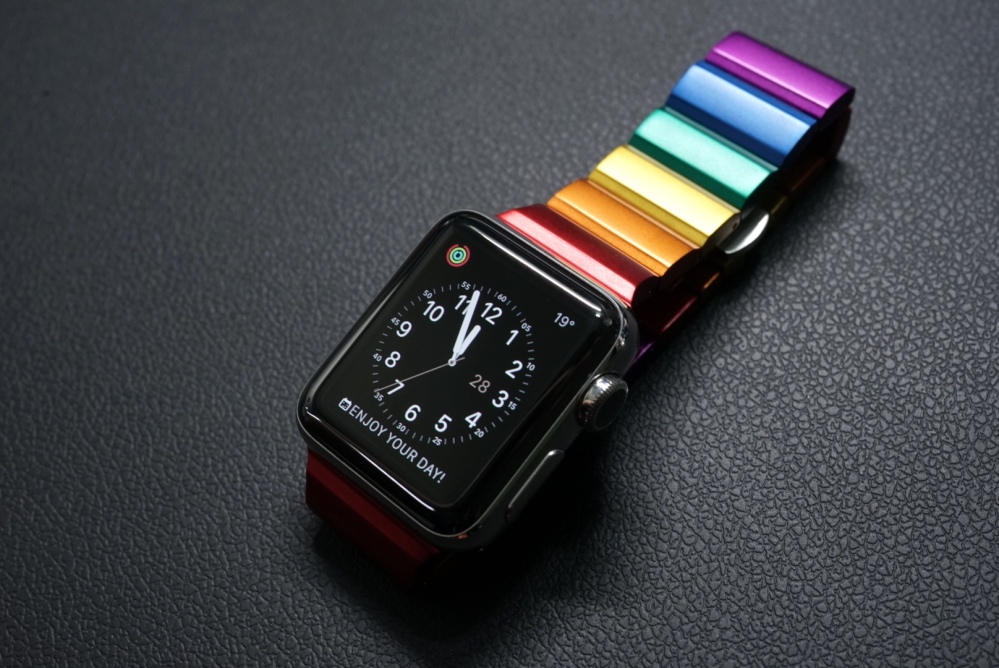 The limited edition Rainbow Ligero is not only a very attractive and special-looking Apple Watch Band, but also designed for a specific purpose. Each sale of Rainbow Ligero, US$20 of revenue will be donated to the Amnesty International Hong Kong to support their efforts to combat discrimination. 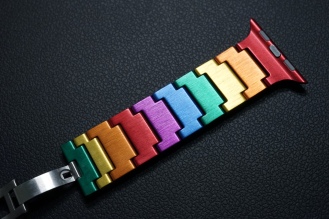 Other than that, it is basically identical to other colors of Ligero bands in terms of specification. For its uniqueness and very limited quantity, if you are interested in getting one for yourself, you can pre-order it from JUUK now and expect arrival in late June 2017.

There are quite a number of improvements and noticeable differences comparing with the pre-production review units. 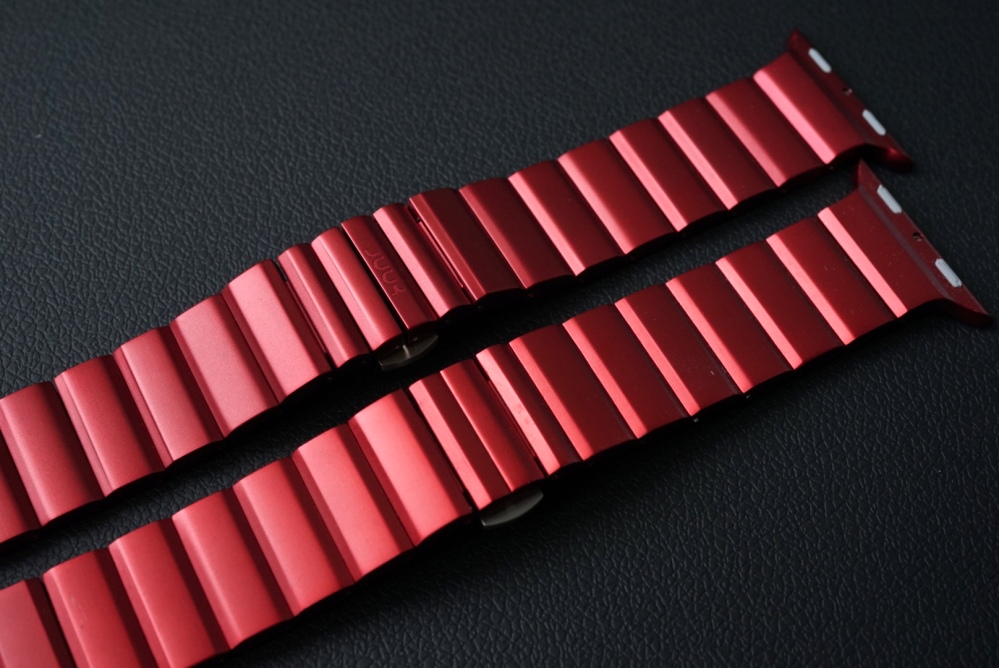 First, about the color and finishing. There is no noticeable difference for the Silver band in terms of color. However, for the Ruby band, I do see a slight variance in terms of color tune that has a very minimal lower profile than the pre-production prototype, which in my opinion looks closer to the color of new Product Red iPhone 7 and 7 Plus.

The inner finishing of the links has changed to a blushed finishing in the final release rather than plain one on the pre-production unit. It is actually the same finish as the higher-end Link Bracelet and it definitely looks more premium in this sense. The buckle is also upgraded to premium 316L stainless steel which is also on par with the Link Bracelet.

Second, the connector links (adapters) now has a 10° drop angle to best fit most wrist sizes. It is quite noticeable when you put the bands side-by-side like the picture above that the right one has a significantly deeper angle turning. I personally find this as a very nice touch as it curves better along the wrist and fits my 155mm wrist perfectly, while the pre-production sample simply leaves a huge gap between the connectors and first links as the falloff becomes much steeper on the 2nd links on both sides. And it was not as comfortable as it is for the final iteration.

This does also help reducing certain friction when sliding into the Apple Watch. Plus with improved rubber pieces and the button at the connector, it does have a smoother experience when installing the band. 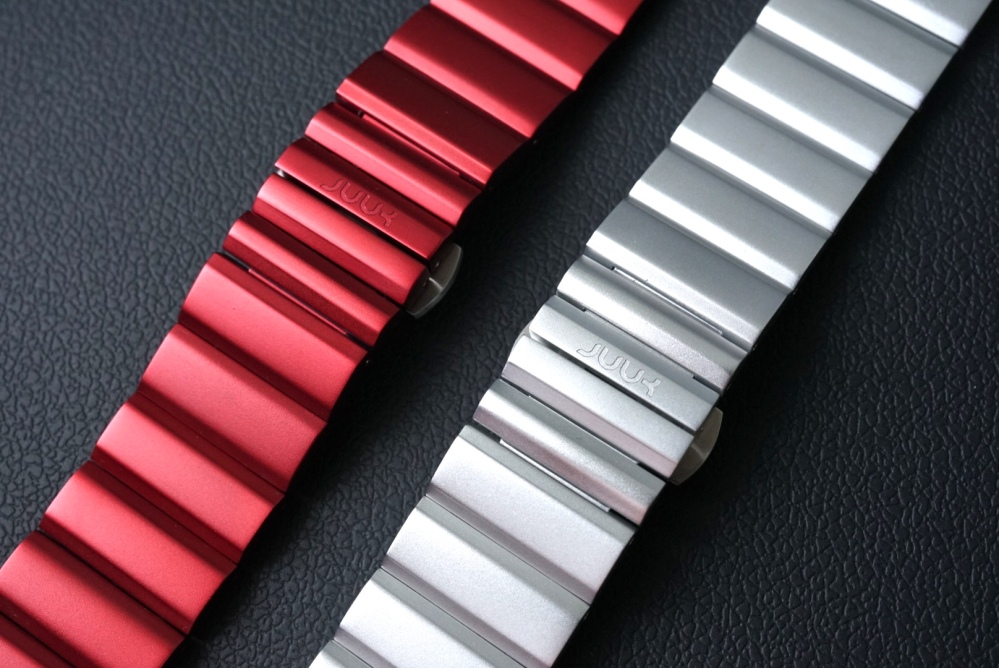 Third, about the link and pin. JUUK aims at making things more user-friendly and easier to play around with. So the band ships with two smaller (5mm) links near the buckle that makes the band more adjustable for all wrist sizes. This means, by right, with the main links being 8mm wide, users can adjust the sizing in several different increments; 5mm, 8mm, 10mm, 13mm, and 16mm or more. And you can see a comparison below between the Ligero band and the Link Bracelet, the Ligero band definitely has a higher degree of flexibility in terms of length adjustment.

Speaking of the pin for the links, JUUK has disposed the screwing links as in their pre-production units and developed a proprietory custom concave capsa pin system so that there would be less hunting around when adjusting the band. This prevents unnecessary scratching on the sides of the links. If the pins were flat, as is normally the case, a user would be moving the tool’s pin back and forth trying to locate the link’s recess (which there won’t be with a flat pin), and potentially scratching the links.

JUUK has also developed a proprietary, 4-stage link removal and installation tool that’s super simple to use, and is included with every unit. It is simple and effective. You can check out the step-by-step link removal tutorial from the YouTube video below:

Lastly, there is a nice engraving of the JUUK logo on the middle link piece of the band. Again, it is there no matter you love or hate it.

My personal experience with JUUK Apple Watch bands has been awesome and I cannot recommend more to you to give it a try. With years of professional experience in manufacturing premium watch bands, JUUK keeps up their fantastic build quality with affordable price tags in their latest Ligero line-up. 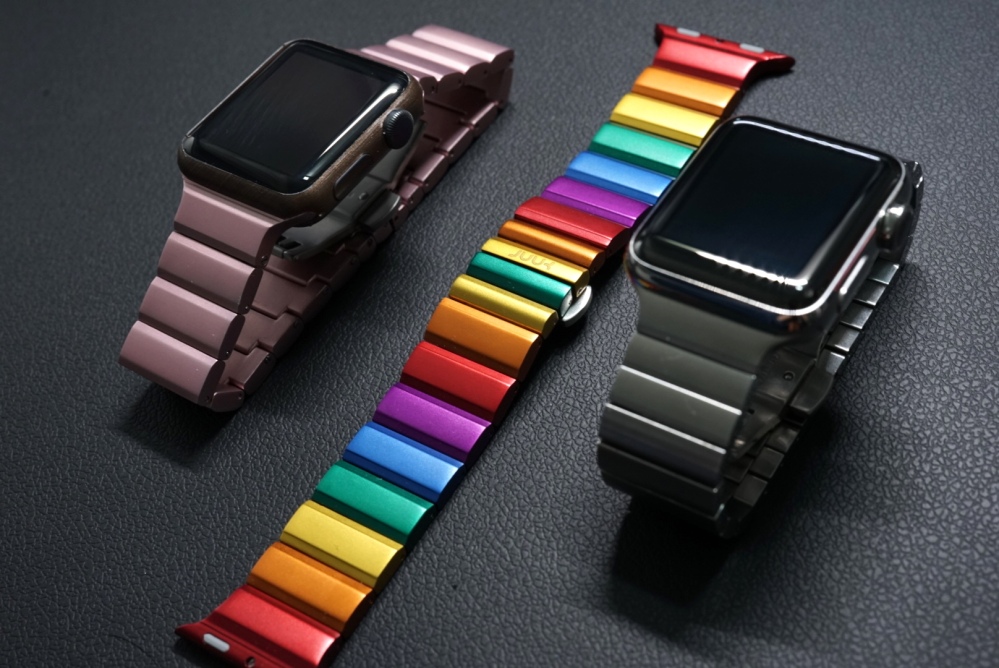 As always, you can’t really go wrong with the spending on this band at less than $200 price point that has a much higher value-for-money than Apple can offer. It definitely worth every buck you have paid for the great product and customer service.

Head over to JUUK’s official site and pick up one Ligero band if you haven’t or missed their pre-order campaign. Be sure to follow our Instagram as well for more cool pictures.

This site uses Akismet to reduce spam. Learn how your comment data is processed.